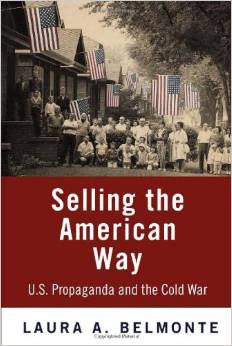 Selling the American Way: U.S. Propaganda and the Cold War

In 1955, the United States Information Agency published a lavishly illustrated booklet called My America. Assembled ostensibly to document "the basic elements of a free dynamic society," the booklet emphasized cultural diversity, political freedom, and social mobility and made no mention of McCarthyism or the Cold War. Though hyperbolic, My America was, as Laura A. Belmonte shows, merely one of hundreds of pamphlets from this era written and distributed in an organized attempt to forge a collective defense of the "American way of life."

Selling the American Way examines the context, content, and reception of U.S. propaganda during the early Cold War. Determined to protect democratic capitalism and undercut communism, U.S. information experts defined the national interest not only in geopolitical, economic, and military terms. Through radio shows, films, and publications, they also propagated a carefully constructed cultural narrative of freedom, progress, and abundance as a means of protecting national security. Not simply a one-way look at propaganda as it is produced, the book is a subtle investigation of how U.S. propaganda was received abroad and at home and how criticism of it by Congress and successive presidential administrations contributed to its modification.