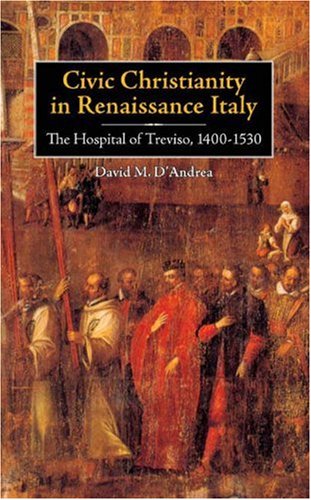 Civic Christianity in Renaissance Italy: The Hospital of Treviso, 1400-1530

Civic Christianity in Renaissance Italy explores the often subtle and sometimes harsh realities of life on the Venetian mainland. Focusing on the confraternity of Santa Maria dei Battuti and its Ospedale, the book addresses a number of well-established and newly articulated historiographical questions: the governance of territorial states, the civic and religious role of confraternities, the status of women and marginalized groups, and popular religious devotion. Adapting the objectives and methods of microhistory, D'Andrea has written neither a traditional history of political subjugation nor a straightforward survey of poor relief. Instead, thematic chapters survey the activities of a powerful religious brotherhood [Santa Maria dei Battuti] and document the interconnected local, regional, and international factors that fashioned the social world of Venetian subjects.
Grounded in previously unexplored archival material, the book is an innovative study of the nexus between local religion and Venetian territorial power, providing scholars with this first scholarly monograph of the city that served as the keystone of Venice's mainland empire. This original approach to the critical relationship between provincial powers and the central government also contributes to other important areas of historical inquiry, including the history of popular religion, poor relief, medicine, and education.