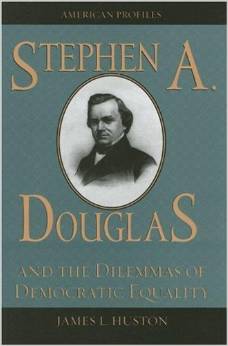 Stephen A. Douglas and the Dilemmas of Democratic Equality

Perhaps best known for his debates with Abraham Lincoln and his role in introducing the controversial Kansas-Nebraska Act, Stephen A. Douglas was a central character in the political firestorm that culminated in the American Civil War. In this engaging new biography, James L. Huston explores the life, ideology, and historical importance of America's "Little Giant."

Born in 1813, Douglas came of age during the great democratization of American life. This was a time when egalitarianism became the national creed and President Andrew Jackson stood forth as its champion. Huston sets Douglas in this social and political milieu, and examines the unfolding of the principles of democracy in and through his life. Douglas's political career as a state legislator, U.S. Congressman, and ultimately U.S. Senator from Illinois placed him at the center of the struggle over the meaning of democracy and equality at both the state and national level. The renown that his debates of 1858 with Lincoln of the Republican Party garnered is but an emblem of the status that Douglas had as a leader of the Democratic Party and as the representative of a specific interpretation of the Jacksonian legacy of democratic populism.

Huston places Douglas's life within the current historiographical controversies regarding the antebellum period and updates our understanding of the role that Douglas played in the creation of the Illinois Democratic party, the development of the ideals of Manifest Destiny, the struggle over slavery's extension into the West, the meaning of popular sovereignty, and the legitimacy of peaceful secession. Extensively researched and carefully documented, the book guides readers to original archival materials via a detailed bibliography and a section on the sources of Douglas's more famous statements.