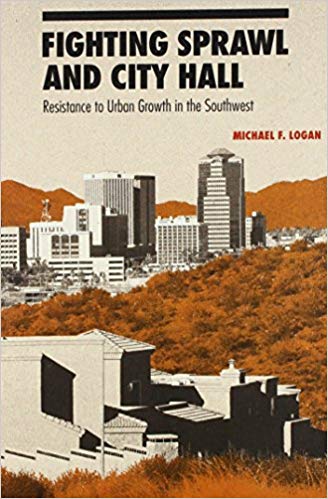 Fighting Sprawl and City Hall: Resistance to Urban Growth in teh Southwest

The line is drawn in cities of the American West: on one side, chambers of commerce, developers, and civic boosters advocating economic growth; on the other, environmentalists and concerned citizens who want to limit what they see as urban sprawl. While this conflict is usually considered to have its origins in the rise of environmental activism during the late 1960s, opposition to urban growth in the Southwest began as early as the economic boom that followed World War II. Evidence of this resistance abounds, but it has been largely ignored by both western and urban historians.

Fighting Sprawl and City Hall now sets the record straight, tracing the roots of antigrowth activism in two southwestern cities, Tucson and Albuquerque, where urbanization proceeded in the face of constant protest. Logan tells how each of these cities witnessed multifaceted opposition to post-war urbanization and a rise in political activism during the 1950s. For each city, he describes the efforts by civic boosters and local government to promote development, showing how these booster-government alliances differed in effectiveness; tells how middle-class Anglos first voiced opposition to annexations and zoning reforms through standard forms of political protest such as referendums and petitions; then documents the shift to ethnic resistance as Hispanics opposed urban renewal plans that targeted barrios. Environmentalism, he reveals, was a relative latecomer to the political arena and became a focal point for otherwise disparate forms of resistance.

2016 The University of Arizona Press