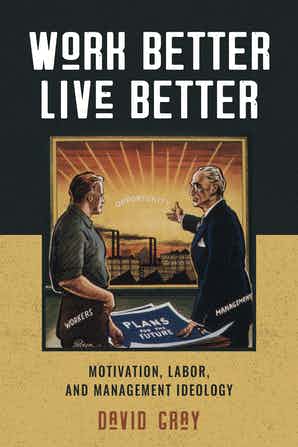 In the United States, a strong work ethic has long been upheld as a necessity, and tributes to motivation abound—from the motivational posters that line the walls of the workplace to the self-help gurus who draw in millions of viewers online. Americans are repeatedly told they can achieve financial success and personal well-being by adopting a motivated attitude toward work. But where did this obsession come from? And whose interests does it serve?

Work Better, Live Better traces the rise of motivational rhetoric in the workplace across the expanse of two world wars, the Great Depression, and the Cold War. Beginning in the early twentieth century, managers recognized that force and coercion—the traditional tools of workplace discipline—inflamed industrial tensions, so they sought more subtle means of enlisting workers’ cooperation. David Gray demonstrates how this “motivational project” became a highly orchestrated affair as managers and their allies deployed films, posters, and other media, and drew on the ideas of industrial psychologists and advertising specialists to advance their quests for power at the expense of worker and union interests.