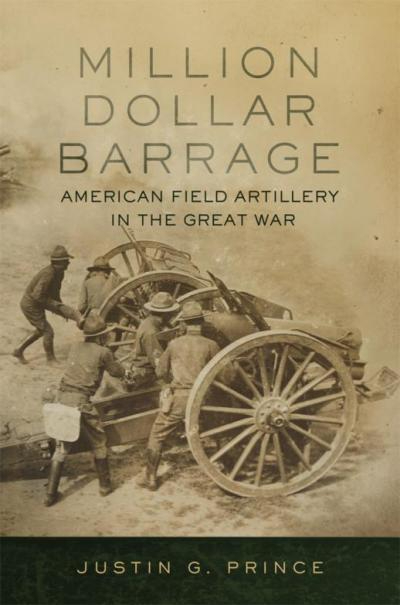 At the beginning of the twentieth century, field artillery was a small, separate, unsupported branch of the U.S. Army. By the end of World War I, it had become the “King of Battle,” a critical component of American military might. Million-Dollar Barrage tracks this transformation. Offering a detailed account of how American artillery crews trained, changed, adapted, and fought between 1907 and 1923, Justin G. Prince tells the story of the development of modern American field artillery—a tale stretching from the period when field artillery became an independent organization to when it became an equal branch of the U.S. Army.

The field artillery entered the Great War as a relatively new branch. It separated from the Coast Artillery in 1907 and established a dedicated training school, the School of Fire at Fort Sill, in 1911. Prince describes the challenges this presented as issues of doctrine, technology, weapons development, and combat training intersected with the problems of a peacetime army with no good industrial base. His account, which draws on a wealth of sources, ranges from debates about U.S. artillery practices relative to those of Europe, to discussions of the training, equipping, and performance of the field artillery branch during the war.

Prince follows the field artillery from its plunge into combat in April 1917 as an unprepared organization to its emergence that November as an effective fighting force, with the Meuse-Argonne Offensive proving the pivotal point in the branch’s fortunes. Million-Dollar Barrage provides an unprecedented analysis of the ascendance of field artillery as a key factor in the nation’s military dominance.